WANT TO LISTEN TO US?

THE SEASONS # ∞ : A (RE)CREATION FOR BRASS BY ALLIANCE

Created in 1998, the Alliance Brass Quintet is composed of musicians from the " Conservatoires Supérieurs " from Paris, Lyon and Geneva. Wishing to promote and enrich the brass repertoire, this chamber music ensemble participates in its evolution and construction, notably through the production and diffusion of shows and creations that take into account various forms of artistic expression for all audiences during concerts but also through residencies and cultural mediation actions.
Alliance takes its numerous themed programmes and musical theatre shows (notably Brass Quichotte, composed by Etienne PERRUCHON, directed by Didier BERNARD and recorded with the help of actor André DUSSOLIER) throughout France and Europe.

In more than 500 concerts, the ensemble was a great success with the public. The press, unanimous, underlines the right balance between mastery, finesse and fantasy.
After his 3rd album produced in collaboration with the Lyon Oratorio Choir, the Choirs and Soloists of Lyon-Bernard TETU: « Requiem » of Gabriel FAURE"; in an unpublished version for Brass Quintet, Organ and Choirs (arrgt. Hamid MEDJEBEUR) under the artistic direction of trombonist Michel BECQUET.

Alliance will present in September 2020 its last 2 Albums: « Saisons # ∞ « (the complete Seasons by Vivaldi and Piazzolla in an unpublished version for brass) and « Plus de saison « (book/CD of the tale written and recorded by novelist Nancy HUSTON).

Alliance is supported by BUFFET GROUP.

A creation for brass instruments around the 4 seasons of Vivaldi... And Piazzolla ?

Vivaldi's 4 Seasons are timeless, universal, unique: Piazzolla answers them through the nostalgic language of a "simple" tango.

If the 2 geniuses talk as much about joy as melancholy, alternating in their own way virtuosity and emotion, the temptation was great to put them in the abyss . . . 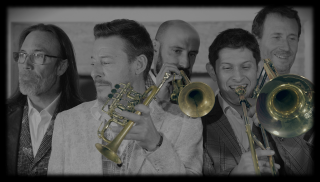 THE CYCLE OF THE SEASONS BY 2 MYTHICAL COMPOSERS