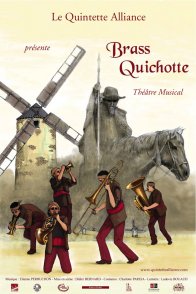 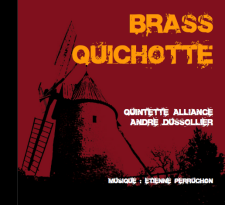 LISTEN TO AN EXTRACT PLAY

A musical show, mixing music, theatre, literature and offering by its transversality multiple possibilities in terms of artistic creation.

On the theme of Don Quixote....

Don Quixote has marked the history of Western literature, certainly beyond the expectations of Cervantes himself. This modern novel has spanned almost four centuries, marking all artistic fields: whether in literature, painting, cinema, dance or music, the artistic production originating in these picaresque adventures is immense.

The characters, the situations, the different emotional states emanating from the novel are so many elements that we believe they could serve as a basis for the creation of an original musical show for our brass quintet.

The story and characters

This novel depicts the adventures of a gentleman from La Mancha, Don Quixote, whose mind has been clouded by excessive reading of books of chivalry (the theme of the antihero). As a result, he sets off to run the world as a righter of wrongs (the theme of the quest), believing he will resurrect the errant chivalry and exploits of his hero, Amadis of Gaule.

Don Quixote is accompanied by his squire, Sancho Pança, a ploughman who will leave his wife and children to follow and serve him. Like any good and self-respecting knight errant, Don Quixote sets off on an adventure with a mount, to which he gives the name of Rossinante.

Finally, to perfect his character, our hero chooses a beautiful to love (theme of love), Aldonsa Lorenzo, daughter of a ploughman, whom he renames Dulcinea and who becomes the lady of his thoughts (theme of comedy and exaggeration).

During their epic, Don Quixote and Sancho find on their path episodic characters whose successive appearances enrich the main action with sometimes epic plots. This work contains multiple dimensions that are constantly intertwined. Fascinating, it constantly oscillates between dream and reality, tragic and comic, humorous and serious.

"This Don Quixote is yet another way of thinking about musical theater. As with a ballet, music is the permanent thread of dramaturgy, but it is not a ballet...

As with an opera or a musical, the story and the situations advance and evolve with the musical discourse, but it is neither an opera nor a musical...

This work commissioned by the Alliance Quintet is a bit of all that.

We wanted to find a guiding idea that would showcase the abilities of the quintet's musicians and allow us to create a staging around the work.

Don Quixote is a myth I'm particularly fond of. This story of madness, humour and death has been chasing me for a long time now.

This new creation around Don Quixote is in fact a series of paintings evocative of his story, and particularly of his relationship with Sancho and his love for an imaginary Dulcinea".